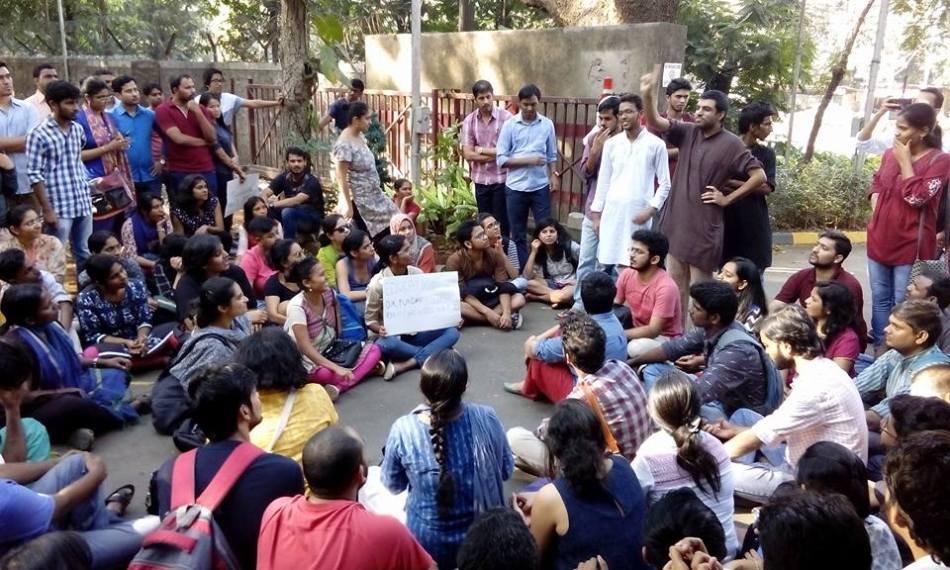 The Tata Institute of Social Sciences (TISS) was set up in 1936 by the Tatas, one of the oldest Indian Industrialist families. It was the first Indian school to  train youth in social work. Today it is a deemed-to-be university fully funded by the Indian government. It consists of four campuses in three different states in India. TISS is known for its engagement in critical research, often areas which other universities will not approach. Coupled with their intensive requirements for fieldwork and the cooperation with governmental and non-governmental social work. Recently, TISS has been challenged by massive onslaughts in terms of funding and intervention by external forces in the independent research work. Rahul Adwani was president of the Student Union (SU) at TISS in 2016-17.

What are the main issues that the Student’s Union has been standing up for?

To get straight to the point, we are living in a time when student groups and unions, that do not conform to the current dispensation and the ideas preached by them (through their various frontal organisations), are facing the brunt of the government and institute administration in campuses across the country. There have been concerted attempts to curtail freedom of expression, assembly and protests through increased surveillance and punitive actions against those who are seen as not falling in line. Simultaneously, as discussed in the previous response, there have been funding cuts at both the institutional and individual level; for the latter in the form of discontinuation or scaling down of scholarships to students from marginalised communities (most of whom are first-generation learners) and fellowships to researchers, which more adversely affects women. Discrimination in a number of ways, continue in campuses. All this seriously affects the ability of students, researchers and professors alike to fearlessly initiate and undertake research. These are steps that the TISS Students’ Union, as also unions of other universities have been trying to resist at present.

What kind of role do you see in education and the sciences?

This is a really tough question. By virtue of being a purely social science institute, even the coursework and research done in it should be, and is political. But how much of it goes beyond the classrooms in the form of concrete political action is a question worth pondering upon. Though students of the institute, especially from the School of Social Work, are directly involved in interventions on the field, over the years political consciousness of students has gone down. This is a result of multiple factors which include mainly increase in coursework which leaves students with very less time to discuss politics, change in the demographic composition leading to an increase in the number of students coming from privileged communities and increased surveillance among others.

You were an active part of those protests, and helped lead the students through the struggle. Facing many difficulties while dealing with the administration as well as leading diverse coalition of students, what was your overall impression?

With the administration, the point of conflict was that according to them, the root of the problems lie in orders and policy changes at the level of the central government. They claimed that they were doing all that was possible for them to absorb the adverse impact of these changes.

However, according to our experience, all of this is not so simple. In most of the cases, initial changes triggered by new guidelines or orders from the government continue and are taken forward by the Institute administration till the point they become normal and opposition/resistance dies.

Well, the existence of different groups and coalitions also adds to the complexities. Different groups differ on the prioritisation of demands and the mode of protest/negotiations. Political equations also determine who all will come together on an issue and be visible to what extent. This also creates some tensions among members of the elected Students’ Union.

I was surprised to witness the student protests during the fall of 2016. Would you describe TISS as a very political place?

In ways more than one, the protests in 2016 were about the survival of the inclusive policies and ethos that TISS had been following to a great extent as a result of the Constitutional mandate of affirmative action. These included the fight against the withdrawal of the provision of exemption from upfront fee payment for students coming from the Other Backward Classes. You would be surprised to know that more recently (for the session 2017-18), the administration decided to discontinue this for the Scheduled Castes and Scheduled Tribes too.

In addition to this changes like the discontinuation of Non-NET fellowship and subsistence allowance for research scholars have meant that survival in the institute (in terms of being able to meet the financial needs) for students coming from marginalised families and communities, and women is becoming increasingly difficult. Our list of demands also included a strong opposition to increasing surveillance within the institute campus in the form of new CCTVs and biometric attendance system for all classes. These, we believe, are against the liberal ideals that TISS stands for. Any university is composed of its students and we believe that the Institute administration has no right to impose upon adult students, measures that they do not approve of. Unfortunately, all these changes are a part of the larger scheme of affairs in Indian higher education. There is a systematic attempt on the part of the government to privatise higher education and create a disciplined, compliant workforce for capital. The massive fund cuts to institutes which promote critical thinking and increasing surveillance are steps towards this end.

What do you believe is the biggest and most important challenge for us students, right now?

According to me, the biggest and most important challenge for students across the globe right now is to come to terms with the nefarious designs of the government-corporate nexus. It is important for us to understand the ill intentions and not get swayed away by false promises. Doing the latter ends up in compromises with the administration which, in the long run, is even more dangerous for students’ movements. We will have to strategize, stay firm on our belief and move ahead accordingly. It is also becoming increasingly important for us to connect across provinces and countries, share our problems and actions; this will help to reveal the similarities and differences in patterns.