During my first weeks in Denmark, I was lucky enough to have a group of wonderful people from my new university organizing activities and events for us international students, with the purpose of introducing us to Danish culture. Among these – between a beer pong tournament and a cooking session – was dumpster diving.

Coming from Italy, I was pretty surprised to find out that Danish students voluntarily dive into piles of garbage, an activity that in Italy is forbidden even to the homeless. In my country, student benefits are virtually non-existent, and we generally look up to the Nordic countries, where students actually get paid to study (whaaat??!), with our heart filled with envy and admiration. They are our role models, the nation Italians want to grow up to be but never get to, because we are distracted deliberating on the permission to use Parmesan cheese on fish, while our politicians steal more money from the education and health sectors – but that’s a whole other story.(*)

Back to my story, the first group dumpster diving took place at night on the campus, and I had to skip it in order to catch the last train back to Copenhagen, where I live. However, a couple of months later I got the task to write this article and document it with pictures, so I got the pleasure of accompanying two Danes on a excursion to the back of a supermarket – an authentic Danish experience.

We met in front of the chosen supermarket around 10pm. The supermarket and the date were chosen based on my friends’ previous experiences and results. Now, as most students and youngsters in Denmark have done it at least once, and as a considerable percentage of them does it regularly about a couple of times a month, I was forced to ask myself whether dumpster diving is legal in Denmark or not – and when I say “myself”, I mean Google. Here’s the result:

In any case, April is not spring in Denmark, and nights are pretty chilly, so I recommend a heavy coat to whomever intends to give the endeavor a chance – possibly an old one, because you might accidentally rip your sleeve off with a sneaky spike in the dark, and also because, you know, you are about to dive into garbage. Waterproof gloves might come in useful, too.

For the sake of a pleasant start between Danish authorities and me, I won’t go into detail here on how exactly we reached the bins. Let’s just say we fell down a rabbit hole and when we looked around we were in Garbage-land. Bins of different sizes and colors surrounded us on every side. We turned our flashlights on and dug in – literally.

The first bin we opened, a blue one, was filled to the rim with bread. Rotten bread, you say? No, it hadn’t even expired, and most of it was still wrapped in its plastic package. It simply wasn’t first-day fresh anymore, so the supermarket didn’t want to leave it on display for the demanding customers. Luckily, some of us are not that demanding.

Then we turned to a huge red metal box with four openings, one on each of its irregular sides. This bin was taller than the tallest of us – and he is pretty tall – and a small window was located pretty high on two of its walls, which means that to reach its bottom on those sides my friends actually had to dive head-first into it – one of them held the other’s feet in a funny cartoon-like scene. The openings on the other two sides were pretty big, so they climbed in and stood among the trash bags. Here, among crushed eggs and old fruit, we uncovered (luckily, again, still enclosed in their plastic packages) brand new socks, stockings, underwear, shoes, vacuum-sealed ham and about fifteen boxes of assorted chocolates. 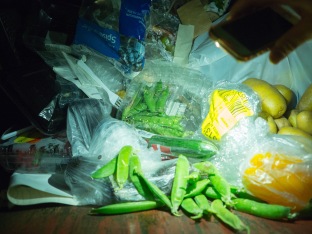 Under many of the other lids we lifted we found nothing, or worse, pineapples, together with other items not better identified, covered in thick white hair with green stripes.

My friends say it wasn’t a lucky night (**) – they even suggested maybe the supermarket recently changed their schedule for throwing away the trash and emptying the bins. I say my bread-cake was so yummy that after two weeks my friends and I had yet to get tired of it.

(*) Note: All jokes aside, Danes do receive money to study (the ones of them not living with their parents receive around 5000kr per month) and this money is in fact better than the zero euros students receive in other countries, where they may also have to pay taxes to attend university. However, this money is not such a big amount as it may sound at a first impression. In fact, the cost of life in Denmark is pretty high: students will pay on average 3000 to 4000 kr per month of rent, whether they live in a dorm or in a shared apartment, and the remaining money is definitely not enough to cover all the expenses – such as bills, transportation, phone, groceries and beer, this last one not seen as an extra luxury, but as a fundamental part of Danish social life.

(**) Apparently, on a lucky night you can find loads of good food – hundreds of eggs, kilos of fruit and vegetables and all sorts of high-brand goods they wouldn’t even look at among the supermarket’s aisles (always for economy’s sake). According to my friends’ calculations, dumpster diving in a group about once a week for one month could result in the collection of about 3000 kr worth of food.

My name is Mariachiara Faraon. I’m an Italian expat living in Copenhagen, a master student of Communication Studies and Cultural Encounters at RUC and a mental illness survivor and advocate. Tired of the strictly theoretical teachings and the frontal classes typical of Italian education, I moved to Denmark to try new paths to knowledge and learning. In my spare time, I practice yoga and meditation and develop my skills of assiduous reader and writer.